Post Archives: Thanks For Nothing NBC Asian America (Because Nothing About ‘Miss Saigon’ Is A Top Asian American Video) 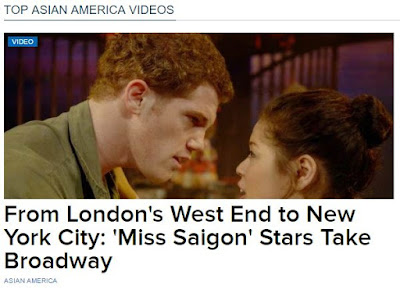 First, let me say that you do some good work – I’m not trying to say you don’t, nor am I personally saying anything about any of your writers – Viet Daddy here isn’t going to get all ad hominem on anyone – but I think there’s a little issue when you have a blatantly racist POS show set in the dreams of White People as one of your featured “TOP ASIAN AMERICAN VIDEOS” without any mention of the controversy surrounding it.

Did you just forget?

Or is it a symptom of corporate White Washing (because wasn’t that video with Eva Noblezada and Alistair Brammer from TODAY earlier this month)?

Or perhaps maybe an editor just didn’t get enough oxygen to their brain because they wanted to see how many tapioca pearls they could fit up their nose before they pressed enter during the approval process (I would go with this one because I think we could all understand that)?

Or maybe you just don’t give a fuck about Viets, Viet War Orphans, the families left behind, or just the simple history of this “show” (and yes, AP style dictates I do actually use the word “fuck” in that sentence – albeit not in all caps because that would just be crass and I at least like to have a modicum of decency).

I mean really – what’s your defense?

And just for the record I did search out the recent articles on “Miss Saigon” you have which returned the following:

And no, they don’t bring up any of the controversy for this current run – the run you’re promoting.

But you already knew that right?

Sincerely,
I really would go with the Tapioca Pearl Defense