Post Archives: Steven Yeun, Sorry To Bother You, And Being Hot. Kiss Me Cause I’m Steven Yeun Hot. 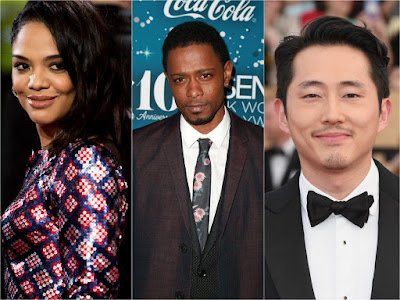 This weekend I chucked the baby in the corner with some chả giò and a box of Jarts, took K-Wife by the hand, and went to see the Boots Riley movie Sorry To Bother You starring Lakeith Stanfield, Tessa Thompson, Danny Glover, Terry Crews, Jermaine Fowler, Omari Hardwick, and Steven Yeun (among others).

Honestly–while I feel bad about the Jarts “incident”, I wouldn’t take those stitches back for anything, because this was one of the best movies I’ve seen all year.

Subversive, smart, shot in a such a trippy beautiful way, social commentary galore (but with a realistic POV as well), and just an amazing cast, I truly didn’t know what I was about to see.

While you don’t see a lot of Steven Yeun in the trailer, he plays a fairly large part in the film as one of the telemarketers who is leading a revolt. And while I don’t want to give too much of the plot away–there is some Steven Yeun Kiss-Me-Because-Well-I’m-Steven-Yeun-Hot which did get me a little sweaty (and who he kisses you’ll have to wait and see–albeit I kind of saw that coming early, unlike another person, who apparently also ate a lot of the large popcorn).

And I think that’s pretty damn cool (the kiss, not the popcorn).

Anyway…I hate to cut this short…because apparently I have a CPS meeting I have to go to…so I’ll just leave you with a dreamy Steven Yeun from Sorry To Bother You. 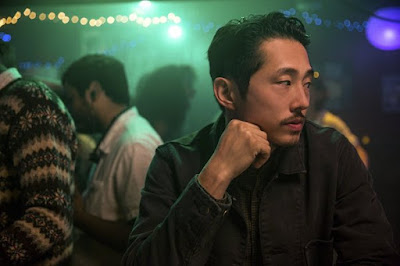