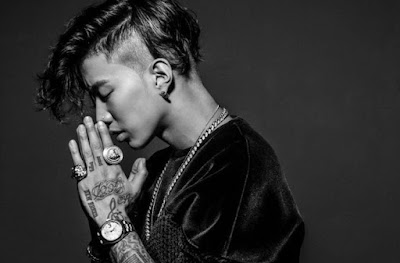 I thought the title of this post was fairly representative of everything that’s going right, as well as completely and utterly wrong with Jay Park and his ROC nation debut–which begs the question of if ROC Nation really knows what to do with him, as well as if ANY major label here in the U.S. can truly represent an Asian American or Asian music act.

If you don’t know who Jay Park is, you may not follow or listen to K-POP, or you haven’t been a fan of R&B/Hip-Hop/Rap in South Korea, as if you were, you’d probably know who Jay Park is–and that’s not a condemnation on your musical tastes (because I was never a 2PM fan)–that’s just saying (so don’t feel bad).

But you really should know him.

So if he’s new to you here’s the quick breakdown:

He left for South Korea when he was 18, went to the group 2PM, had some things go on (a little controversy), left the band, came back to the states where he grew up in Seattle, did some YouTube, blew up again in the second act (because he still had a fan base), did a movie, went back to South Korea, and the rest is history. He owns two labels, puts fans in a frenzy, and gets millions of views on his videos. He’s an artist, business man, and overall–makes some great music.

And then here’s a sampling of Jay Park (and don’t worry-there’s a reason for all of this, but homework is okay people).

#1 “All I Wanna Do”–Good beat, partners with the 1Million dance crew, it’s a great song and showcases the strengths of Jay Park. I like to call it pop r&b.

#2 A little more risque..more dance r&b. You may not like the video per se, but you can’t deny the dance moves and the smoothness of the Jay Park It Right Here.

But then you have “Soju” – the first single off his ROC Nation EP “Ask About Me”, featuring 2 Chainz.

It’s not great–it feels too “Well this is what ROC Nation wants” versus “This is who Jay Park is”. I’m not saying it’s completely in-authentic, but you don’t get the feeling that it’s really Jay Park either, and if you’re going to rap with 2 Chains (for better or for worse), I just don’t think you can bring that song.

Nothing kills an artist debut like something that doesn’t feel authentic, or that feels too forced.

As a debut, I just expected a lot more because it’s Jay Park–but I’ve always been disappointed when the U.S. debuts come out for practically everyone.

Compare that though with his freestyle on Sway In The Morning which he completely kills, and he also steps up to the challenge of talking about style and appropriation and how he got to where he was (it’s really a great interview).

Or take his freestyle on L.A. Leakers.

How do you spit that but still come out with “Soju”?

Who green lit that song?

I am glad though to see that people are viewing his freestyles more and he’s getting out there and making the most of the rounds (which gives them a better taste in their mouth than “Soju” did).

At the same time I’m glad to see that on his new EP he’s done an English remake of last year’s hit “Yacht”, except featuring Vic Mensa.

And that the next video is one for “Sexy 4 Eva” (audio track below).

I just feel like those are more in line with the Jay Park we know.

So while I didn’t like “Soju” or think that was a great debut, I do think the direction is quickly getting changed, and hope they’ll find the right mix of what he’s famous for, but for a U.S. audience (and all audiences here) versus making him into something he’s not (and he and his label AOMG, has to take responsibility for that too from an artist and business sense).

At the end of the day, let the Asian American man shine doing what he’s supposed to do versus making him into something he’s not.

But Even If He Kills It–Does It Matter If People Still Troll With Comments Like Asian Men Still Have Small Penises?

Yes. You did read that right, because as I was reading the comments on one of the freestyle videos, I read comments like:

You could say it doesn’t matter because there will always be trolls and people that look down on Asian men and Asian America in general (and we can talk about other things from that comment too)–but I still can’t help but wonder if that type of stereotypical thinking will have an effect.

But I don’t know if we can guarantee it either.

Here’s to hoping the world is a better place than I sometimes give it credit for, and that the next few videos from Jay Park are something special.