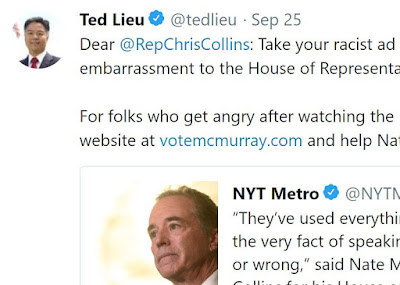 In the bid to represent New York’s 27th Congressional District, off-again/on-again candidate Representative Chris Collins (who also just got indicted on insider trading charges this summer) decided to up the ante with his ad against Democratic challenger  Nate McMurray.

McMurray called the ad misleading and “xenophobic”, but Representative Ted Lieu (D) from California didn’t mince any words in his description from his tweet on Tuesday:

Dear @RepChrisCollins: Take your racist ad and shove it. You are an embarrassment to the House of Representatives.

For folks who get angry after watching the racist ad, go to @Nate_McMurray website at http://votemcmurray.com and help Nate.

And in a NY Times article on Wednesday Lieu had this to say:

This is an issue that has affected the Asian-American community, and for Chris Collins to do this is wholly unacceptable […] He is playing to racial stereotypes that have been particularly hurtful to Americans who happen to be of Asian descent […] I would call him a racist to his face the next time I see him and ask him to take the ad down.

Sometimes we do have to “wordsmith” to get our point across depending on the situation and the audience, but in some cases it just needs to be called out for what it is–because we also can’t be afraid to call out racism when it is in fact racist–and I’m glad to see Representative Ted Lieu call it out for what it truly was in this case.